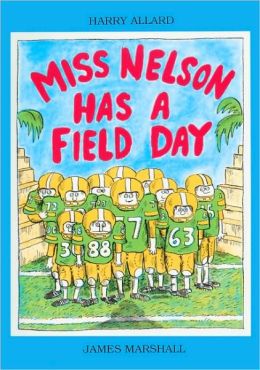 The Smedly Tornadoes have not only never won a football game, they have never scored a single point! Coach Armstrong goes bonkers and Miss Nelson decides to help out. She enlists Coach Viola Swamp to whip the team into shape and save the day! Snappy sequel to “Miss Nelson Is Missing!” A perfect fall musical.

“Frolicking football players, a perky cheerleader, a hilarious spatula-wielding cafeteria lady, and an electrifying Viola Swamp, who transforms from the sweet-faced Miss Nelson to the dreaded coach, all play to the appreciative giggles of local schoolkids… The carefully choreographed slow motion finale is as grittily elegant as anything on ‘Monday Night Football,” – The Washington Post
“Joan Cushing has created another tour de force,” – The New York Times

Take a look at the script here: MISS NELSON HAS A FIELD DAY! perusal copy (sample)