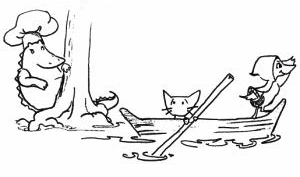 When the Big Bad Gator spies tasty duck Petite Rouge and sidekick cat TeJean heading down the bayou, Petite leads him on a wild duck chase through New Orleans and Mardi Gras all the way to a surprise ending. A Swamp Chorus sings back-up to the Zydeco-driven score in this foot-stomping, family-friendly musical soaked in Cajun hot sauce! Saucy and colorful, as you’d expect, from the creator of the blockbuster hits Junie B. Jones and the Miss Nelson musicals!

“Almost everything about the show is hot: (the Louisiana bayou), the music (with peppy zydeco and steamy jazz), the dancing (lots of tango moves) and, most of all, the fiery Cajun sauce…a musical with heart,” – The New York Times
“With the exuberance of a Mardi Gras float wheeling through the Big Easy, writer and composer Joan Cushing has turned a 2001 picture book into a clever stage production whose tunes explode with Louisiana zest!” – The Washington Post
“As snappy as a string of cayenne peppers!… Miss Cushing’s show luxuriates in the music of New Orleans – Cajun, zydeco, Dixieland, gospel, jazz and the blues…and her talent for infectious rhymes [is] as sharp as ever… Petite Rouge is a feast for the senses and the appetite, as Miss Cushing’s adaptation revels in the sights, music and food of Cajun country,” – The Washington Times