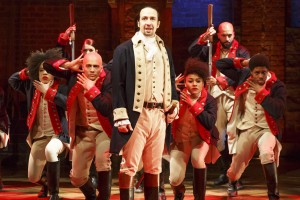 Lamentably, however, much of the acclaim that has and will accrue to Hamilton brands it as one of the first pieces of theatre to successfully incorporate hip-hop elements and sensibilities. That’s like someone thinking they’ve discovered rap music after hearing Eminem’s song “Stan” (coincidentally, and arguably, another white narrative). This is unfortunate; it not only ignores the 20-plus year legacy of hip-hop theatre in the U.S.—Idris Goodwin, Eisa Davis, Psalmayne 24, Hip-Hop Theatre Junction, Teo Castellanos, Will Power, Universes, Marc Bamuthi Joseph, etc. It also, more disturbingly, ignores LMM’s own In The Heights, a hip-hop-infused musical with a contemporary story about Latinos in a changing neighborhood that ran on Broadway for 3 years, won 4 Tonys and recouped its money after just 10 months. Yet we’re still in a cultural landscape where In The Heights and other hip-hop generation stories will never be celebrated to the extent that Hamilton will be, simply by virtue of who the show is about.